Txakoli – the ‘Other’ Basque Wine

Travel opens the door to a host of enriching experiences: the first glimpse of a famous city, that connection when a local recognizes your attempt at speaking their language or discovering a culture through its cuisine. The Basque Country of Spain is a perfect example of this ‘sense of place’ —a destination where food and wine entwine with a proud heritage, a unique language, and abundant hospitality.

The Basque region, or País Vasco, is located in northwest Spain along the shores and hillsides of the Bay of Biscay and extending over the international border with neighboring France. The rugged slopes of the Cantabrian Mountains to the west and the Pyrenees to the east form a dramatic backdrop to this politically autonomous region.

The Mystique of Basque Country

The Basque people are somewhat of a mystery—their language, Euskadi, has no association with the Latin-based dialects of the rest of Europe, and scholars now believe there is a link to ancient Armenian. They are fiercely proud of their maritime heritage and are more than happy to let you know that Juan Sebastián Elcano was the first man to circumnavigate the globe and that Basque fisherman likely discovered America long before Columbus.

Txakoli – A Wine as Individual as the culture

It seems only appropriate that such a unique region should create a wine as individual as the Basques themselves and expresses their joy of life. Txakoli (CHACK-oh-lee) is such a wine.

The name is said to come from the Basque word Etxakoa (you pronounce the letters’ tx’ like ‘CH’ in English) meaning ‘homemade’ or ‘enough for home.’ Crafted from the indigenous varieties Hondarabi Zuri (white) and Hodarabi Belza (red), these wines were enjoyed in the area either at home or in local seaside restaurants. For many years, the phrase “Like Txakoli” was intended as a slight, inferring that something wasn’t of quality. Happily, those days are over as this refreshing, unusual, and food-friendly wine is finding its place in the world of wine.

Chacolinas were the place to be in the late 1800s. Typically Basque, they blended good wine, local food, and friends.

Txakoli has a long history with the first written references dating back to the 9th century. Extensive vineyards covered the mountain hillsides and valleys during the 13-15th centuries, and in the late 1800s, small, homey winebars known as ‘Chacolines’ became quite the rage, serving only the local wine, small river eels known as Angulas, salt cod, and squid. Like the rest of Europe, the region’s vineyards suffered from the devastation of phylloxera. With the addition of mildew, changing tastes and industrialization, the vineyards all but disappeared by the latter part of the 20th century.

Fast forward to the 1980s. Basque chefs were returning to their homeland, bringing their knowledge and experience gleaned from some of the world’s premier restaurants. Many settled in the seaside town of Donostia-San Sebastian where they created ‘Nueva Cocina Vasca ‘or New Basque Cuisine, showcasing the freshest, local, and indigenous ingredients. Michelin stars soon followed as did international regard for this culinary ‘hot-spot.’ 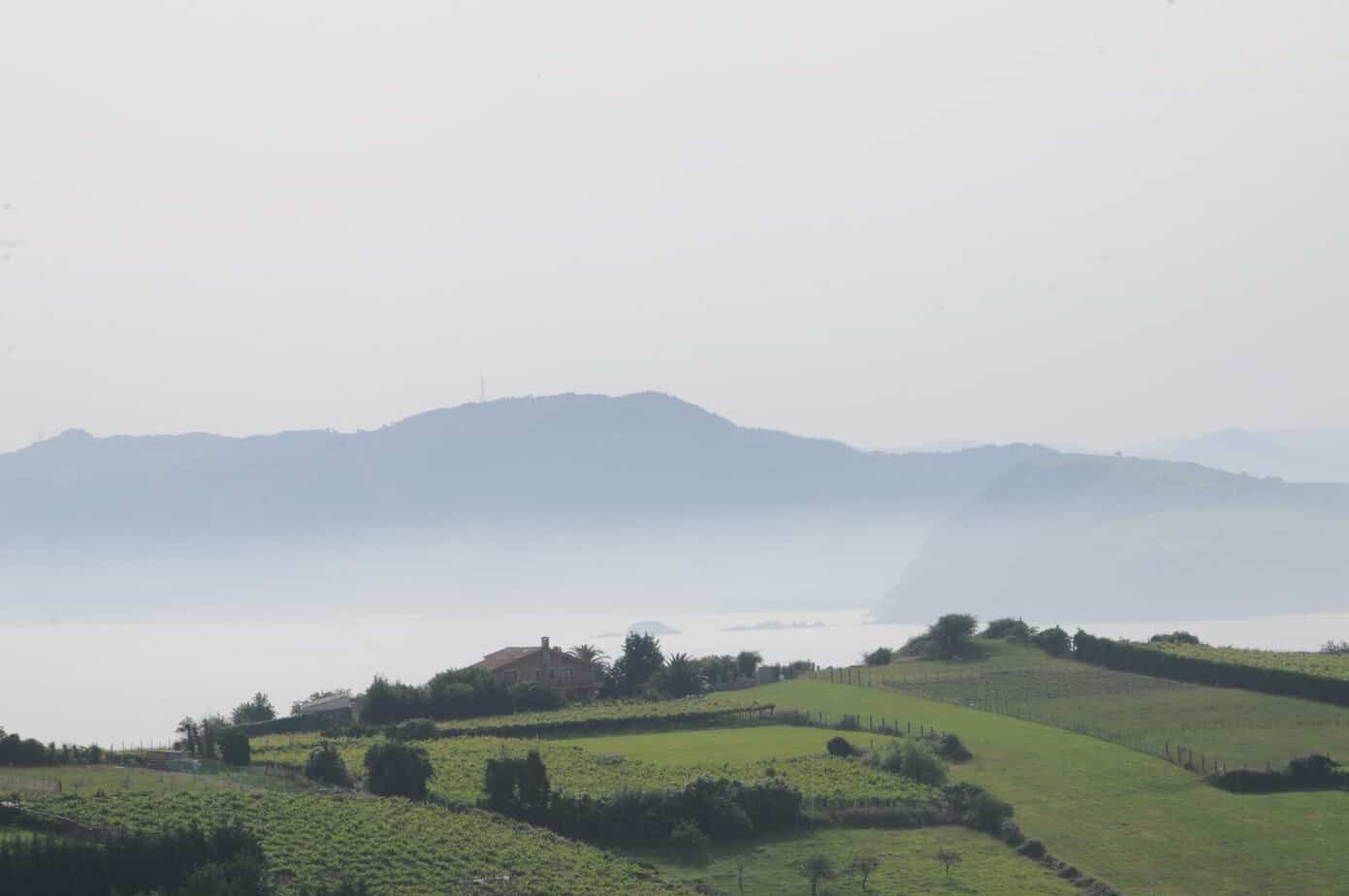 The Txakoli vineyards of Spain’s Basque Country are heavily influenced by the sea. Some swear you can taste it in the wines. photo: Flikr – https://www.flickr.com/photos/carlos_octavio/

This sense of pride and regional appreciation spread to the vineyards. In the early-to-mid-1980s, a new generation of growers and winemakers set out to preserve what little remained of their heritage vineyards, some of which had vines over 100 years old. They planted new vineyards with indigenous Hondarrabi vines and outlined new growing standards as they set out to revitalize the Basque wine industry.

This small, mountainous DO is located in the Northeast portion of Álava province, south of Bilbao. Planted in the limestone and gravel soils of the hillsides and valleys of the Nervión River and its tributaries, the vineyards are protected from the often harsh Atlantic winds. 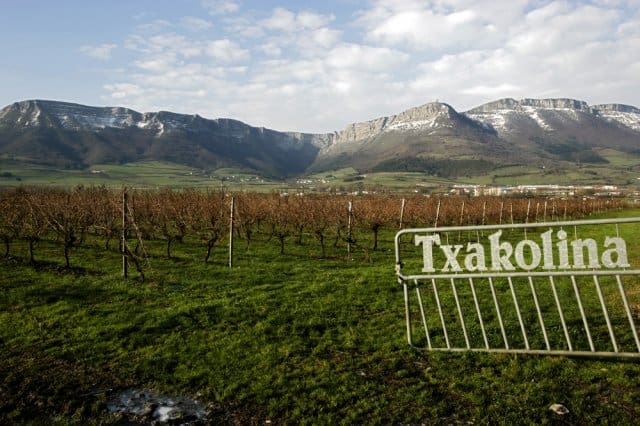 The vineyards of Arabako Txakolina enjoy a high altitude, mountain aspect, shielded from the cool winds from the Bay of Biscay. photo: www.txakolidealava.com

With its influence of industry and urban development (the famous city of Bilbao is not far away), you’ll find this diverse region’s vineyards scattered along the coastline, interior valleys, and mountain slopes. Like the rest of the Basque wine country, these small plots are heavily influenced by the sea with its accompanying humidity and winds.

In 1989, Getaria became the first of the Txakoli regions to receive DO status. The majority of the vineyards overlook the sea, perched on the steep hillsides that slope down to an array of small fishing villages. Vines are trained to grow on pergolas with the grape clusters high above the ground which allows the ocean breezes to keep the vines dry and mildew-free.

Txakoli – a wine to celebrate life

With Basque Country’s deep-seated maritime connection, it comes as no surprise that many Txakoli lovers swear you can taste the sea when you sip the wine. While the majority of production is consumed in small local seafront bistros and the ubiquitous Pintxos bars, exports are increasing. Don’t be surprised to find Txakoli on a restaurant wine list; sommeliers love the new and unusual.

The wines show a slight effervescence which is often accentuated by pouring the liquid from high above the traditional, chilled tumbler-shaped glass. Peach, pear, citrus, tropical hints of mango and pineapple, or white orange blossoms are common descriptors, all enhanced by the lively, zippy, fresh acidity that’s the hallmark of Txakoli.

Txakoli reflects the adventurous, warm, and strong Basque identity where tradition dictates you share fresh, local food, and wine with your friends—even if you’ve just met.

For more information on other exciting wine travel destinations, check out these articles:

Where to Savor and Sip in California’s Lodi Wine Country

Hilarie is a Certified Specialist of Wine and French Wine Scholar whose greatest joy is spreading the gospel of wine, food and travel. In addition to her own blogs at Northwinds Wine she contributes articles to Big Blend Magazine & Radio, Wine Folly, FWT Magazine, Wine Geographic among others.

You’ll Love the Vibe and the Wines at...

Journey Through Australian Wine Regions Aboard the Ghan

Fascinating post, Hilarie! I’d love to try this Txakoli wine. The way the vines are trained to grow high above ground is so interesting. I am sure this was a trip to remember!

Thanks, Debbra – I’m glad you enjoyed the article and, yes, it was a trip to remember and to repeat. But beware, once you start enjoying Txakoli it proves very addictive! Cheers, Hilarie 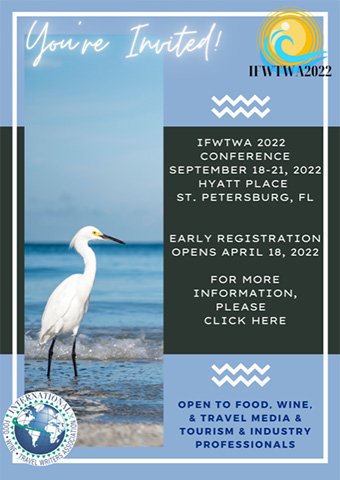 ©2022 FWT Magazine.All content remains the property of FWTMagazine.com and their authors. Under no circumstances should any content be used without our express written permission.