Norway had always been on my travel bucket list; my husband’s too! So, when our daughter and son-in-law proposed a Disney family cruise with our grandchildren that would include three Norway ports of call, we jumped on it.

Cruises are great for a number of reasons, including the opportunity to get snapshots of a region never before visited. Our thoughts are, “If we fall in love, we’ll go back for a longer destination stay.”

One of Europe’s crowning glories, Norway is a magnificent land of snow capped mountains, troll-haunted forests, iridescent glaciers and sparkling fjords. Each port of call was unique and magnificent in its own right. As we’d anticipated, we managed to fall in love with Norway in a very big way!

Oslo – Land of Vikings and Trolls 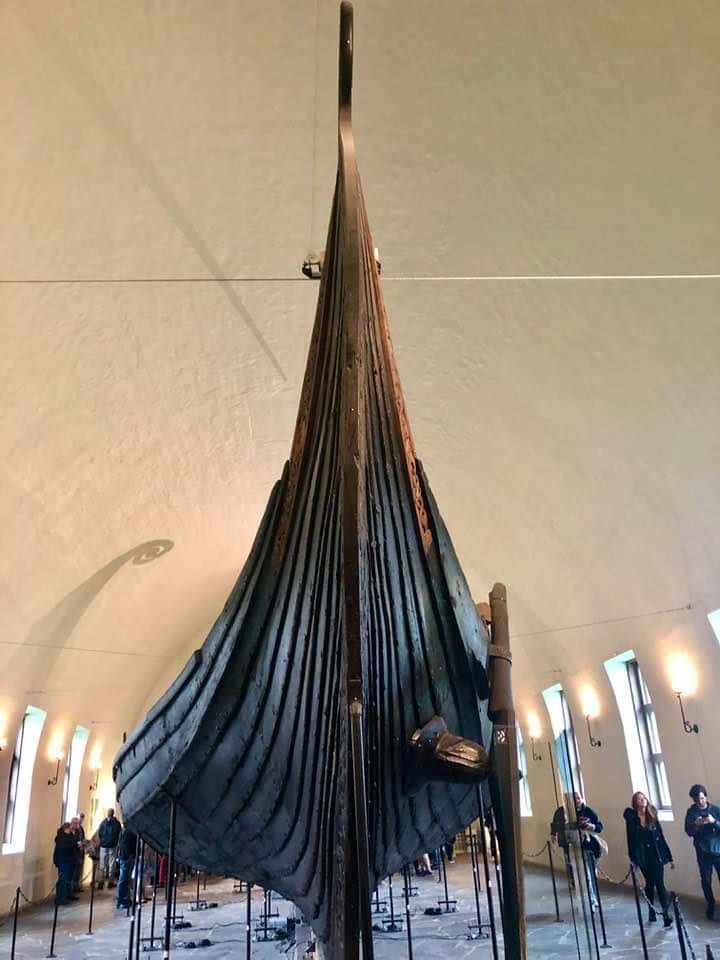 Oslo is Norway’s capital and largest city, yet it is one of Europe’s most forested (hence, its legendary troll stories). Founded by a Viking king in the mid-11th century, its storied Nordic past is best illustrated through a visit to the Vikingskipshuset (Viking Ship Museum). An easy ferry trip from the harbor is the best way to reach the Bygdøy peninsula. The short stroll from the pier to the museum leads past beautiful Scandinavian seaside homes.

The museum features an impressive and expansive collection of wooden ships and artifacts, including a ninth-century Viking longboat unearthed in Southern Norway, having being buried for centuries.

One of Oslo’s most beloved attractions is one we can all treasure — the Nobel Peace Center. We stood in awe in its hallowed halls. Since 1901, these esteemed prizes have been presented to distinguished notables such as Nelson Mandela, Jimmy Carter, Barack Obama and Mother Teresa. 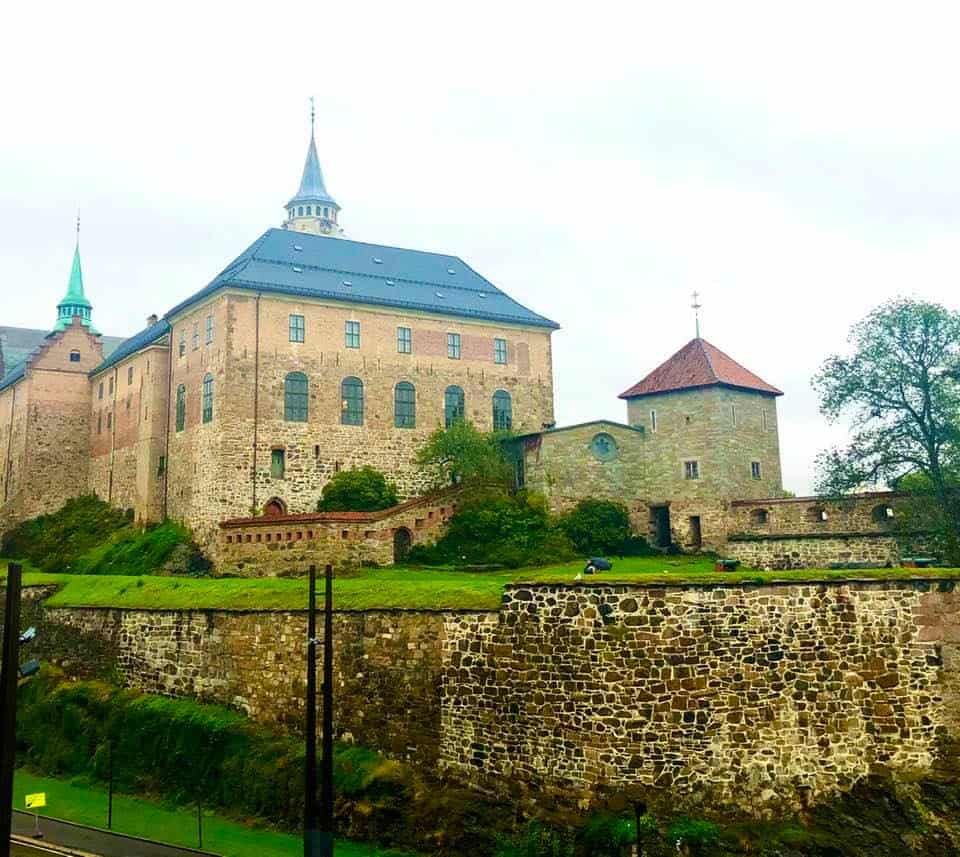 Aukershus Castle and Fortress is the unmistakable iconic landmark of Oslo. Perched high on a bluff overlooking the harbor, the imposing medieval castle was completed in the 1300s. Even in the off-season when tours are unavailable, just walking the grounds of this ancient fortress is impressive, and views from the top are incredible.

Bergen – Gateway to the Fjords

As Norway’s second-largest city, Bryggen (Bergen) has been christened the gateway to the majestic fjords of Norway. Its connection to the sea has historic origins dating back over nine centuries when the city dominated trade throughout the North Sea, Baltic Sea, and Northern Europe. 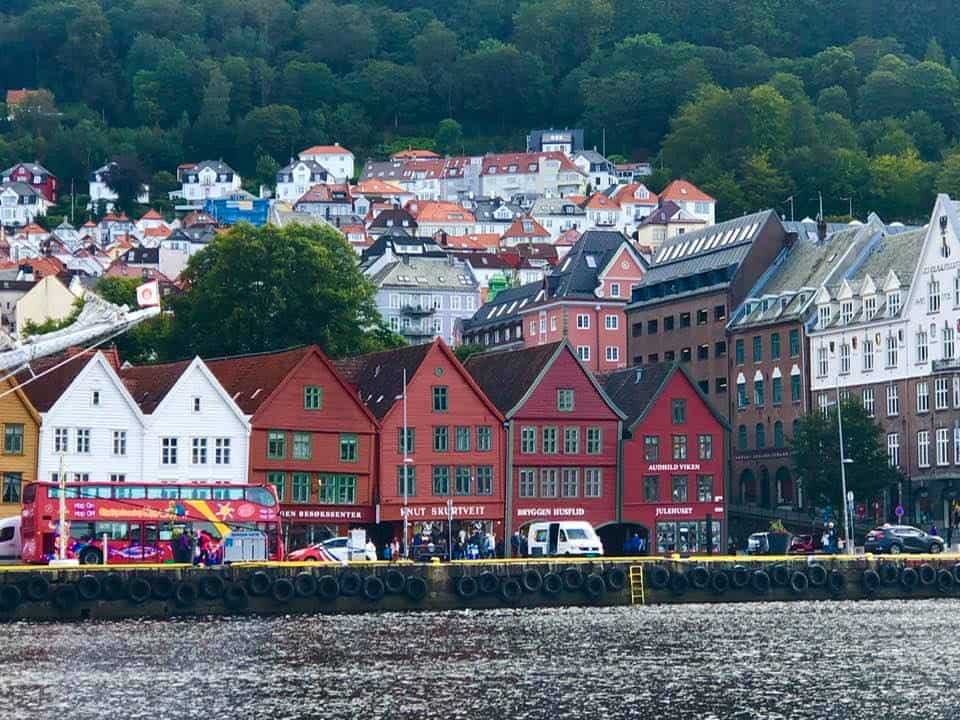 As we strolled through the wharf’s narrow alleyways and overhanging galleries, it felt as though we stepped back into the mists of time to a bygone era. Its wharf and fascinating colorful timber houses built in the traditional Scandinavian style have remained basically unchanged throughout the years. Today, well-preserved cafes, shops and galleries still pay homage to its seafaring roots.

Abundant treasures from the sea are brought in daily from area fishermen to its restaurants and to fishmongers selling their wares in the Bergen Fish Market. This clean, organized, and vibrant outdoor market area also features fruits, vegetables, and handmade crafts.

No trip to Norway is complete without a cruise and guided tour to experience the majesty of the Fjords—the true soul of Norway. Long, narrow inlets are framed by towering cliffs formed by glacial erosion. These geological forces produced rugged, snow capped mountains and hundreds of roaring waterfalls. Along the route, secluded valleys with idyllic villages blend perfectly into the stunningly picturesque landscape.

Our awe-inspiring three-hour round trip with Rodne Fjord Cruises departed from Bergen’s wharf and slowly traversed the 27-kilometer Osterfjord route. The captain skillfully navigated the catamaran through the powerful currents of the narrow Mostraumen strait.

Incredible views are forever etched in our minds as we sailed past small picture-perfect villages, native wildlife and western Norway’s most stunning outdoor scenery. The vessel was able to get so close to the thunderous waterfalls that we could literally reach out to touch the water and feel its icy spray on our faces. 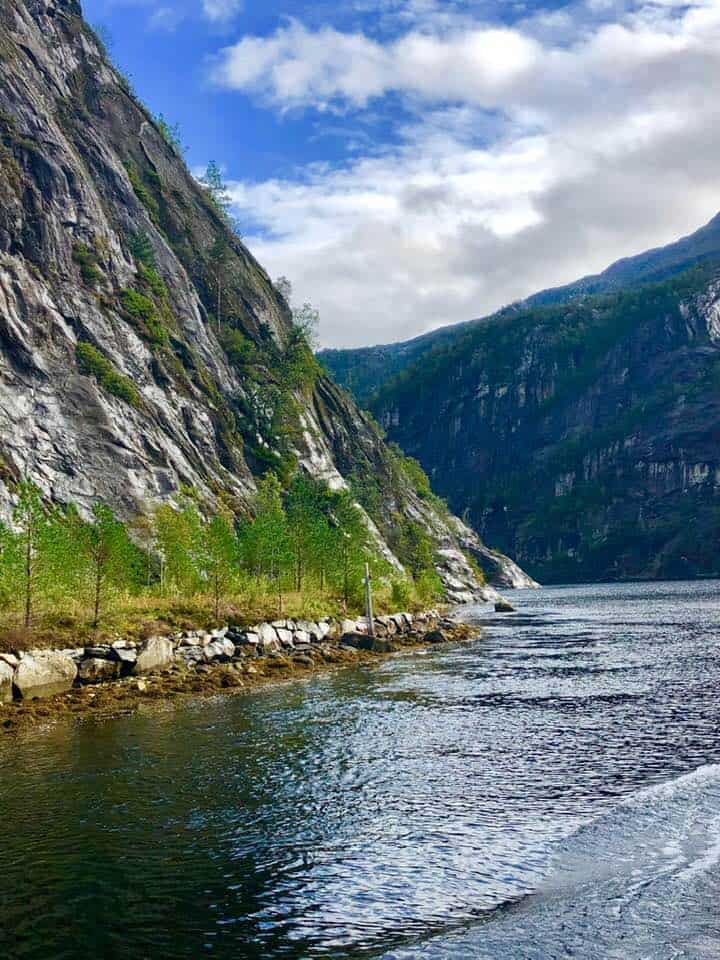 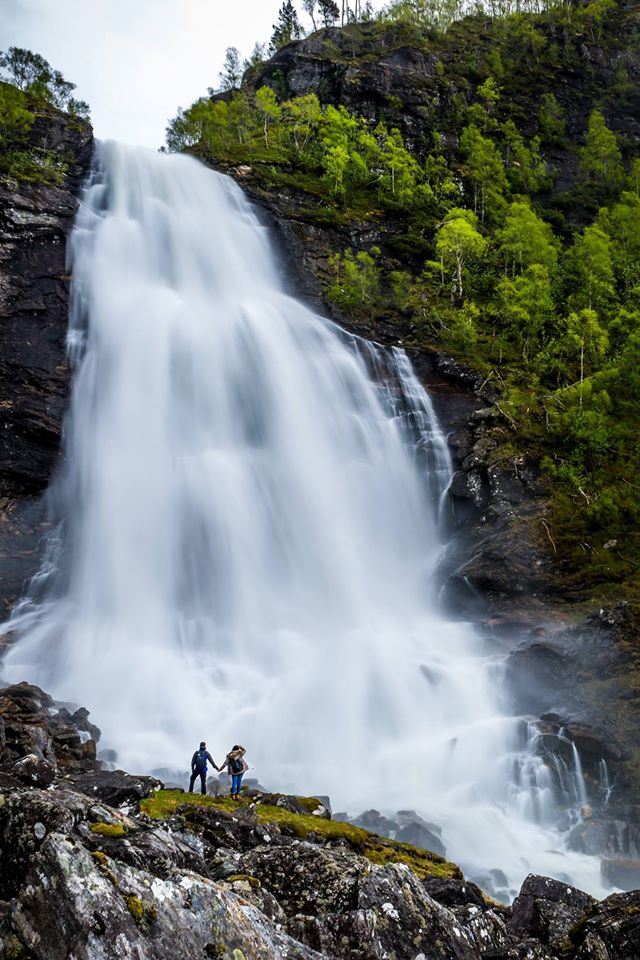 “You have to do it… at least once” a friend of ours told us. That is—experience a wondrous winter wonderland constructed from several tons of crystal-clear Norwegian ice. Bergen’s Magic Ice Bar is the work of world-renowned ice carvers who have created an indoor winter gateway to adventure. Elaborate ice carvings, fascinating seating areas, and even an ice throne entertain guests as they explore this frozen cave-like attraction. Sampling krekling, a fruity, refreshing Northern Norway ale, at their ice bar was literally “icing on the cake.”

The quaint idyllic village of Stavanger beckons visitors with its old wooden houses, winding cobblestone streets, and charming eateries. But what makes this region so amazing is the draw of the outdoors—with almost indescribable awe-inspiring views.

There’s nothing like heading out to see another side of Norway’s enchanting fjords, but, this time by a high seas adventure on a Zodiac RIB Speed Boat. Donning heavy wetsuits, windbreakers, and goggles, we set out on a thrilling high-speed wave-crashing journey. 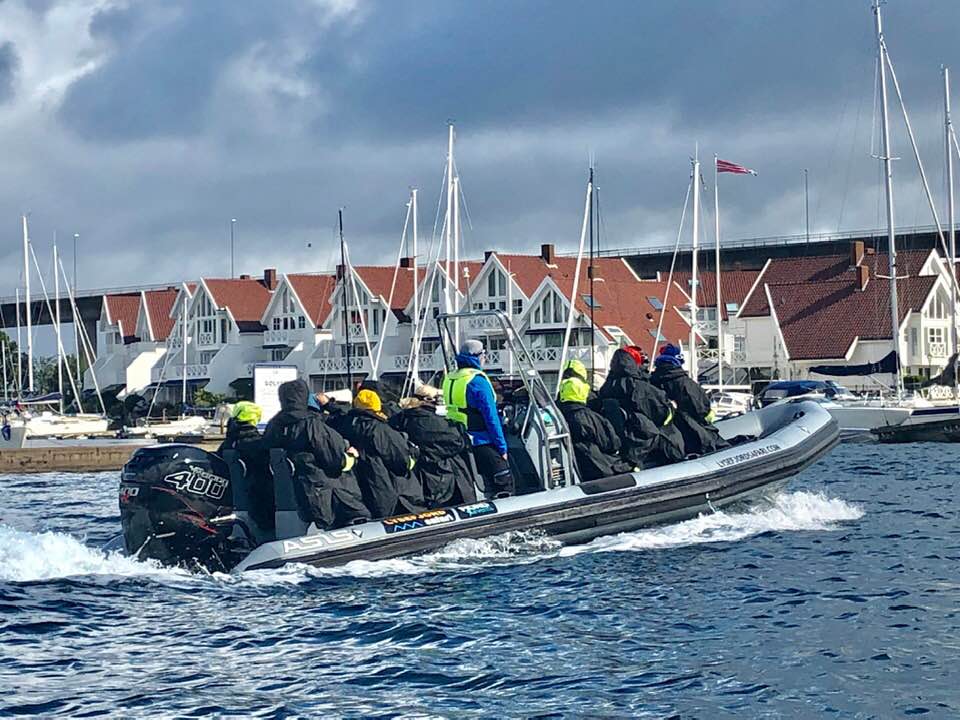 The rain clouds and fog lifted that September morning, unveiling stunning verdant mountain landscapes in the distance. As the sun peaked through, multiple rainbows shone over and through a myriad of waterfalls, too many to count.

Before heading back to our ship, we stopped for a bite at Fisketorget for some Scandinavian seafood. Even though it’s located close to the ship’s dock, it was filled with locals. (Not surprising, since food here is divine.) We weren’t sure what to order so we trusted our server’s recommendations and settled on herring with horseradish cream and potatoes, along with a selection of shellfish brought in straight from the boat. It all went down easy with a draught of local Nordic beer.

The Stavanger Maritime Museum situated in the harbor is a worthwhile stop though we could have used more time to explore here. Two circa-1800 warehouses hold a large collection of sailing vessels and a reconstructed late-10th-century sailmakers’ workshop and merchant’s living quarters. Nautical exhibitions relate the terrifying history of shipwrecks occurring in the turbulent and unforgiving waters of the North Sea, and the brave rescue operations that saved so many lives. 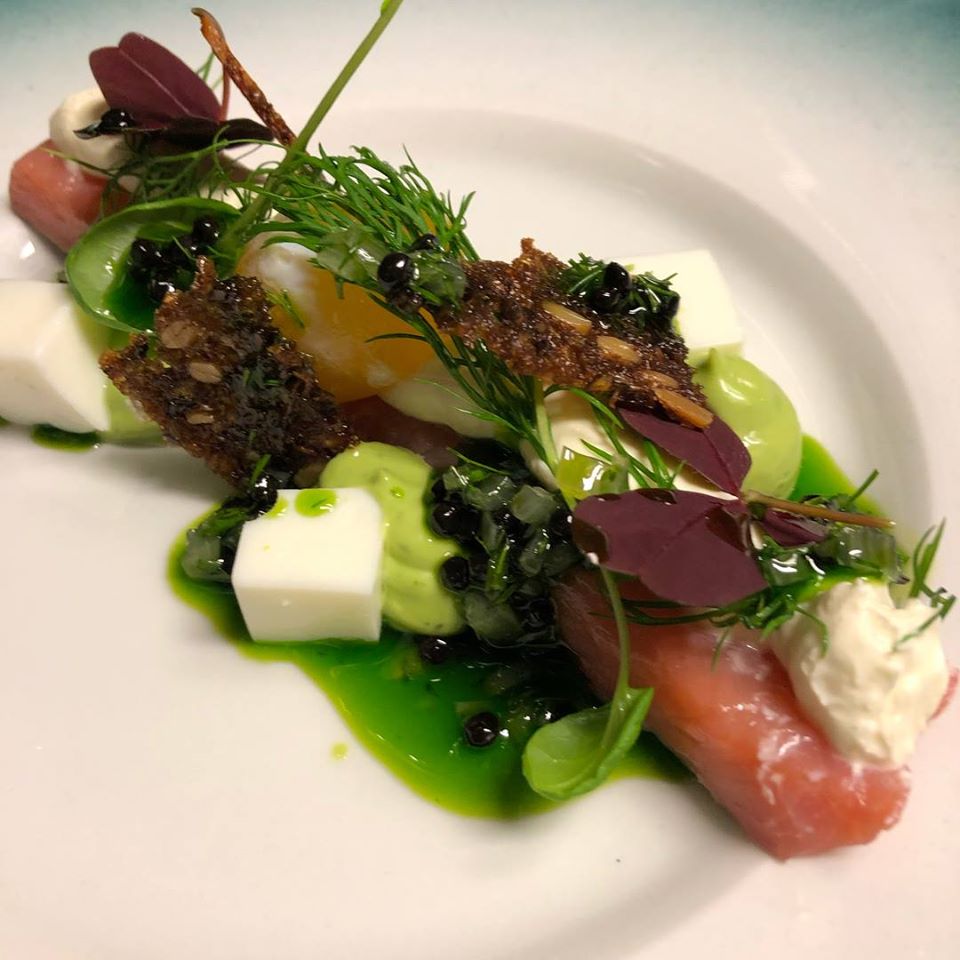 After our “taste” of Norway, we all agreed that it was so impressive we’d have to go back again. After all, we’ve yet to see one of Nordic winter’s best and brightest spectacles—the Northern Lights, best viewed in the city of Tromso.

Tampa – This City Is The Hidden Gem...

A Weekend Itinerary for Palm Springs