Top Posts
Exploring Oregon’s Rogue Valley Wine Region
Urban “Kamping” at San Diego’s KOA Resort
All I Want for the Holidays… (What’s on...
The Tiny Pennsylvania Wine Trail You Need To...
Five Reasons to Visit California’s Paso Robles
Why a Visit to Australia’s Famed Hunter Valley...
Let Us Give Thanks
Let the New York Aquarium Transport You to...
Michigan Wine Country – A Guide to Exploring...
7 Albuquerque Facts from the ABQ Trolley Tour
Home » The Spectacle of Burgundy’s 16th Century Église Saint Florentin

During our last French barging season in 2016, Michael and I barged on our Betty B from Auxerre into Migennes and along the Canal de Bourgogne, accompanied by our barge partners, John and Margaret.

This canal is a beautiful stretch of waterways with some lovely, historic and fascinating towns. You might remember that there were floods in northern France in May 2016, so our barging proved to be challenging, dealing with canal and river closures, as well as éclusier (lock keeper) strikes!

Along the route, I fell in love with one town, Saint Florentin and its fabulous Église Saint Florentin. We visited it twice, and the second time was just as special as the first.

The township of Saint Florentin overlooks the junction of the Canal de Bourgogne and the Armançon river. From some distance away as you barge toward it, you can see a huge church on top of a hill, as is the norm in France.

We moored on the right bank opposite the marina since the marina mooring was in disrepair. The large, imposing church, which we assumed was a cathedral, towered above us. At night, it’s floodlit and looks glorious bathed in lights.

It rained during the night again, and another grey day dawned. After breakfast, we set off to walk into the Centre Ville of Saint Florentin to find the Sunday market. On the way, the rain started again, lessening the joy of our walk up the hill.

We popped into the Office de Tourisme to inquire about the church and were told we needed to collect the key from the office prior to our visit.

We walked past the two antique shops called brocantes and took a look inside, as I’m always on the lookout for antique French asparagus plates. But no luck. It was then on to shop at the marché couvert, a covered market, which we found next to the elaborate, ubiquitous war memorial with its flags and flowers saluting the war dead from WWI and WWII. It’s always sad to see how many young French lives were lost in these tragic wars. 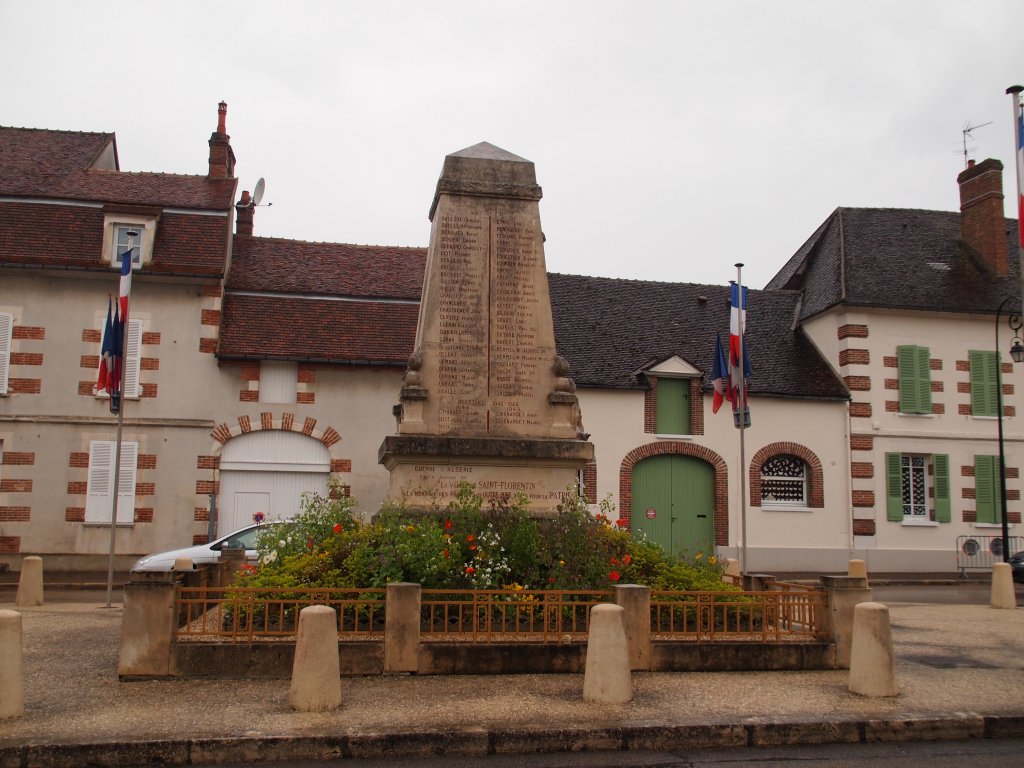 Ubiquitous war memorials are in the center of all French towns. © Tonya Jennings.

The covered market was a large hall, but the day we visited, there were only a few stall holders. This was possibly owing to the bad weather, but also possibly due to our late arrival around 11:00 a.m.

One stall was devoted to the local cheese, Soumaintrain, made by the cheese-maker at the Ferme Leclere.  She told us that this cheese is made in the Yonne Region, called Le Soumaintrain terroir d’Armançe after the local river.

I was told the Ferme Leclere farm has been making cheese from their Montbéliarde cows since 1984, and the cheese is with the affineur (cheese maker) for maturing for 21 months. It’s a pale yellow to orange color, has a strong smell and soft, fine, creamy texture. It tastes of hazelnuts, champignons and the undergrowth.

We were thrilled to find this artisanal cheese and buy it for our guests arriving in a week’s time. Since 2008, this farm has also made Le Chaource AOP, another great local cheese and a favorite of ours.

At another stall, the white asparagus looked lovely, so we bought some for dinner. They turned out to be tough and lacking in flavor, which was unusual, as these are usually delicious and tender. We added some bright red strawberries to the collection, along with a freshly roasted chicken from the rotisserie man, which completed our lunch with the fresh baguettes.

Michael and John were on bikes, so they headed back to the barge, while Margaret and I stayed on to explore the town under our umbrellas. We stopped by the Office de Tourisme again to get the large key to the church and made our way up the hill.

For me, our visit to the Église Saint Florentin was a true highlight of the trip. It looked huge from a distance and was also dramatically imposing up close. Sitting on top of the hill, it dominates the heart of the town, and the century-old gargoyles look down fiercely from high above you.

Although called a “parish” church, its dimensions are so large and impressive it made me wonder if it could have been an unfinished cathedral. As I discovered, it actually was never completed, as the nave was never built. 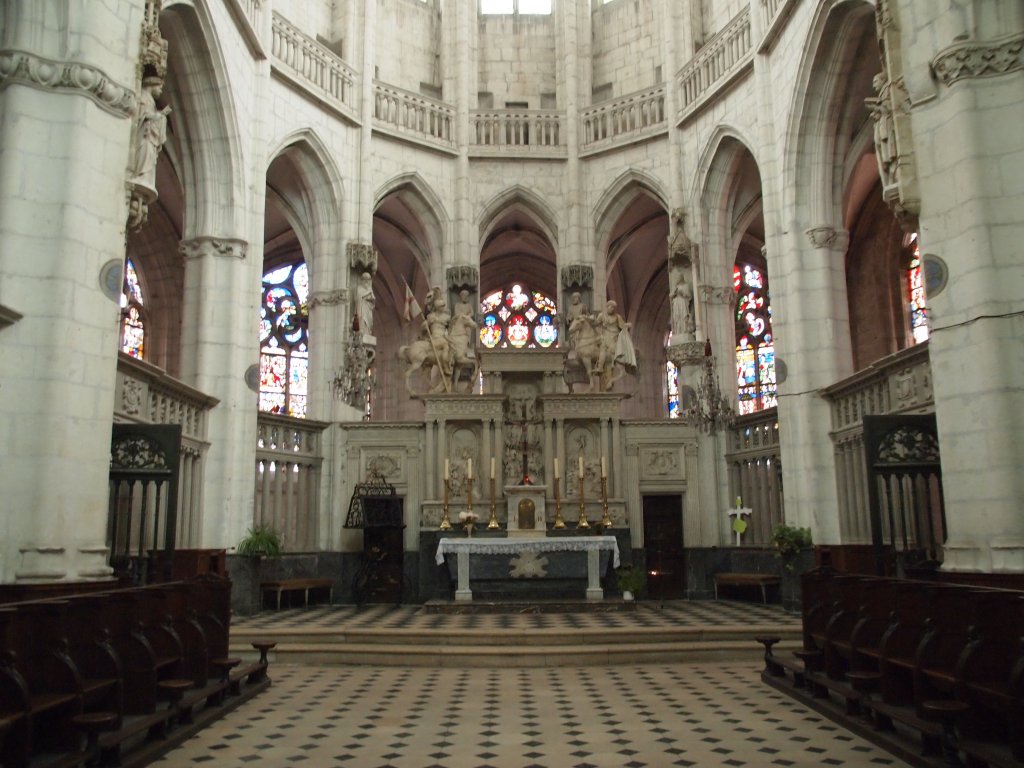 Inside this gorgeous old church is a 17th century organ, beautiful statuary, glorious vaulted ceilings and the most spectacular, breathtakingly beautiful stained glass windows. These totally captivated me. Sadly, my photos do not do them justice.

These 16th century stained glass windows were made by makers from the famous French School of Troyes. There are 16 in total, and they’re among few remaining sets in existence. Each window tells a story.

One is the story of Florentin, a noble knight, who was martyred in the 5th century by a leader of vandals. In 833 AD, his relics were brought to the town by two countesses, and from that time on, the town has been known as Saint Florentin. 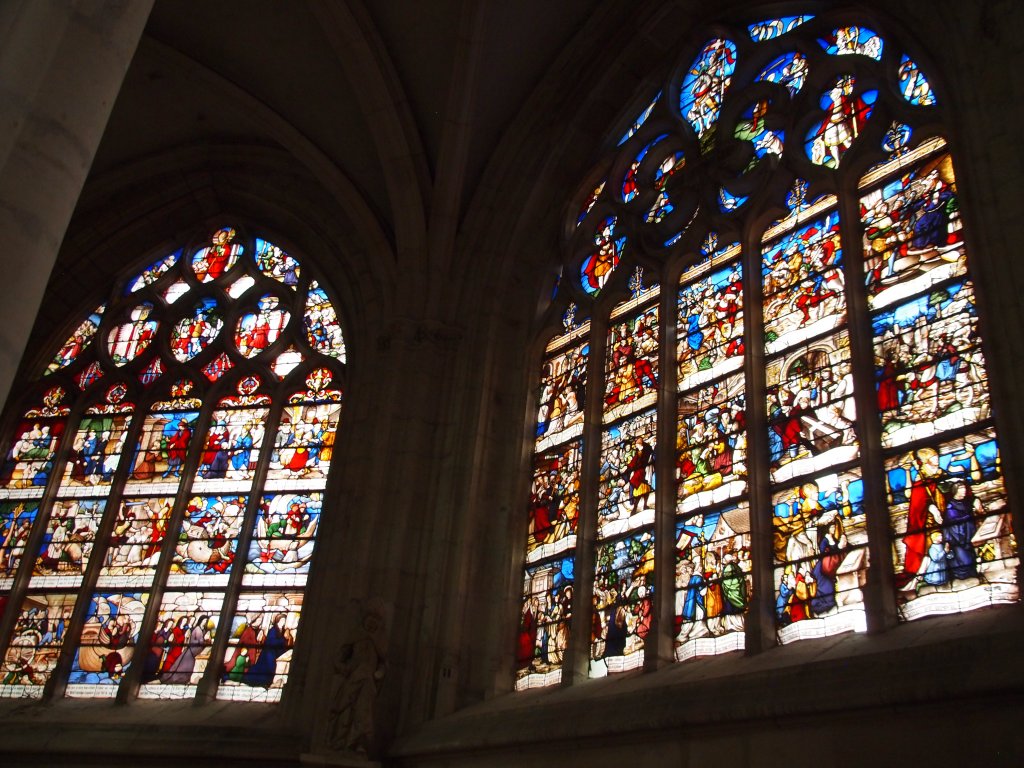 It was a lovely experience to visit this town and its wondrous “local parish church” full of so much history; I was thoroughly enchanted.

Some days later, on our return to Migennes, we had guests on board, so I insisted we go back at Saint Florentin in time to collect the key from the Office de Tourisme for another visit to the church. We lingered as long as possible to take in the pleasure and joy of the moment.

For the first time in my life, I decided to buy a candle. We found some matches and lit it. We then said a little prayer for the Betty B, for her to be safe and well with good mechanics and for all who barge on her to be safe, happy and healthy.

It was a beautiful, thin, tapered candle, and we hoped our prayers were heard. The candles were either one Euro for the small size or two Euros for the large. Although my candle was small, I left two Euros.

We returned the key and popped into the boulangerie (bakery) to buy some gâteaux (cake) for dessert and a couple of baguettes for breakfast the next day. Then, at the épicerie (grocery store), we bought some fruit for breakfast and tomatoes for lunch.

Walking down the main street, which we didn’t do the last time due to the rain, we realized just how pretty Saint Florentin is with the houses made in a Burgundian style of wooden beams and colored walls, similar to those in Strasbourg. We passed by the circular tower that used to form part of the town wall and had been an essential part of the security of the town.

Then, we headed back to the barge for dinner preparation, showers and our Champagne aperitif. Dinner was slow braised pork with prune and apple sauce, ratatouille and creamy mashed potatoes.

What a great life it is barging on the canals in France!

Tonya is passionate about food, France and writing and is the owner of the successful Cooking on the Bay Cooking School in St Kilda, Victoria, Australia. She is a former information manager, trainer and library consultant, now retrained as a chef. At Cooking on the Bay, Tonya encourages students to celebrate the richness and diversity that our food offers us and inspires them to enjoy cooking for your family and friends. Food plays an important part in our social process and affects our well-being. To cook from the heart and share around the table brings so much pleasure and ‘joie de vivre’. Tonya’s food philosophy is to cook fresh, locally produced food in season, to cook for taste and to cook food simply, enhancing the natural flavours so the food looks and tastes delicious. Her aim is to de-mystify cooking and she supports the view of the legendary 19th century French chef and gastronome, Auguste Escoffier, to keep it simple, ‘faites simple’! Chef, Tonya Jennings is founder and owner of Cooking on the Bay Cooking School in Melbourne, Australia.

Philadelphia – Discovering Its History through Flavors

Why a Visit to Australia’s Famed Hunter Valley...